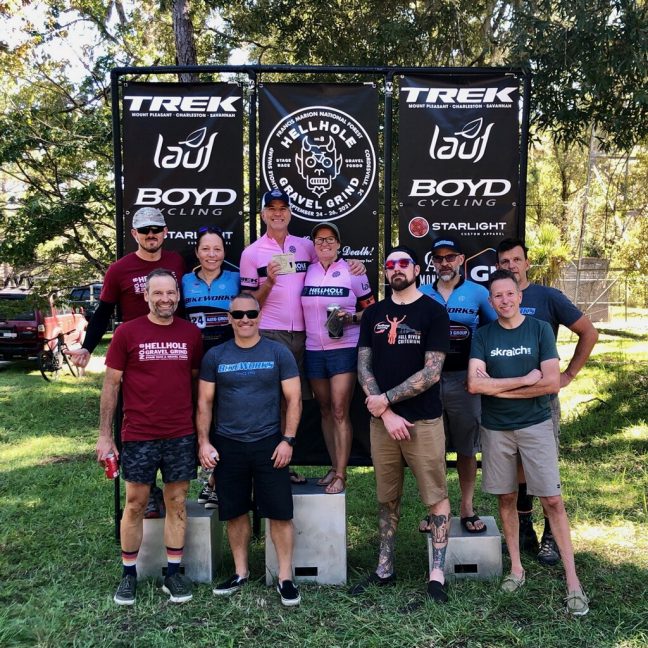 The challenges of doing a gravel stage race in South Carolina are substantial. And Hell Hole checks all of the boxes you can think of, then maybe a few you didn’t.

Logistically, getting to a race that starts on a Friday night and ends on a Sunday afternoon 16 hours away from home is daunting. Then add in the usual complications associated with a 157 mile race held in a national park/swamp: heat, humidity, gear, navigation not to mention highly variable terrain, active wildlife and potential dental emergencies and you have an atmosphere that would consume the average cyclist. It takes months of training & preparation, but even that doesn’t guarantee you success. A bit of luck always helps, and some well thought out tips and advice from the Hell Hole veterans is key. Remember: maintain balance, always look eye, and when in doubt, think to yourself, ‘what would Lil’ Austin do?’

The Friday night (7 Mile) TT went off without a hitch. Having done this race previously, we anticipated the challenges, prepared and executed flawlessly. All came out with a good effort and an understanding of where they stood in their category as well as a decent grasp on what the next couple of days would bring, or so we thought.

Stage 2 Saturday 75 miles – the tension was high before we even left the house. The kitchen felt like the New York Stock exchange at opening bell. Lots of people with plans and priorities operating in a very small space. T’was loud at times, even funny. [Maintain Balance] By the time we reach the start line, while still anxious, I think everyone was ready, despite the over 200 people crammed into the starting corral. Identifying and sizing up competition is key. [always look eye] Some final acknowledgements and information from the promoter and we were ready to go. But how to approach a mass start of mixed fields on an unfamiliar variable terrain course?!? [what would Lil’ Austin do?] So we hammered it, stayed up front in the top 20 riders, out of trouble, gaining time on the dropped for as long as we could. Flats, crashes, bucking bronco rides through the mud holes, bottle ejections, we saw it all. And when the dust settled, ½ hour later, 4 Bikeworks riders survive. A dozen riders in total well off the front taking inventory of their capacities.

The eventual overall race winner rolling off the front and sizing up the survivors [always look eye], urging them to roll to the front and take their turn while he caught his breadth. A small respite. Then as we prepared to turn onto another gravel section, he attacks, long and hard, more chaos. 2 Bikeworks riders and several others are wounded to form the chasing group. After a few more miles, we see more damage, an eventual podium placer at the side of the trail with a flat. A few more miles rolling on one of the few paved sections and we see a sad sight, a familiar silhouette filling his rear tire. And as we get closer our fears are confirmed, bad luck for the team leader. Only Lowney has survived with the leaders. We soft pedal and let our companion “Brad” (3rd in the 40+ cat) know that we plan to wait for our unlucky friend filling his tire. Brad rides on, we aren’t worried, we’d catch him shortly. The rest of the day proved to be grueling, flats would plague the front ½ of the race and pre-race hopefuls would go home empty handed. But others surprised I think even themselves.

Stage 3 Sunday 75 miles – A calmer morning at the base camp. Not sure if that’s due to lessons learned the day before, or the ‘I’m so tired I don’t give a crap’ approach, prob both. Final day at HH is usually more chill than previous because the Fondo aspect of the race is over and the DNFs start piling up. It’s the same course as Saturday, but in the opposite direction, so some familiarity eases tension’s a bit as well.

All 10 Bikeworks racers took the line, 2 in Pink leader’s jersey’s, 3 with podium positions, all others poised with plan in hand to secure some sort of hardware on their last day. The gravel gods smiled on some, brought wrath on others. When a cyclist states ‘I lost my crown’, naturally we assume it relates to some virtual award. But on this occasion, it was a dental tragedy that required maximum rest stop change over time while your teammates are chasing podiums. We wait. But the injury was too much to overcome.

Later in the race the Women’s Open Pink jersey Cheryl Del Colle would fall and teammates Landry and Jon would withdraw to assist, more unselfish sacrifice. Foss would continue after assisting to solidify her 2nd place overall in the Women’s Open. While at the head of the race, (Strong Man) Lowney & Tiney were combing for a powerful chase duo that would secure Lowney’s overall podium position, and gain Tiney the Stage 3 Win in the 50+ category. And in the third group on the road (Diaper Man) DJ Robb Robb would strategize his way to a 50+ Overall win, Burke a 3rd Place overall in the Open and Danny-boy a hard fought Stage 3, 3rd place.

At the end of the weekend, as was the case at Swamp Fox where Bikeworks started the season, our club would out race and out last most of the field for the most podium positions and hardware gathered by any other team. 3 Pink Jersey’s, 10 podium prizes, 100’s of beers and priceless time doing what we love with people we enjoy. Another successful Bikeworks style weekend.