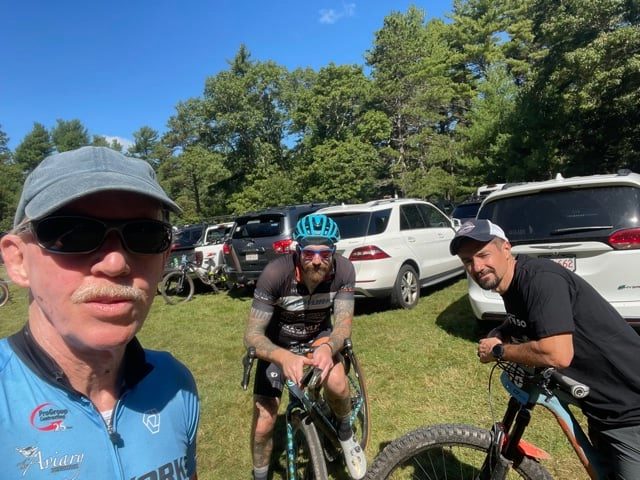 Freetown 50 Race Report: Cousin Joe asked for a race report from Freetown 50 mountain bike race. Here it is now, in case you are interested.

Sunday morning I was nervous, but I had a nice clean Scott Spark (Lord Pilky’s’s future bike, he tells me), cleaned up to Cousin Brian’s exacting standards and ready to go, so i ate my obligatory superstrength-imparting banana and headed off to Slab Bridge Road for 7.45 am. I found the event to be very well organized, as first witnessed by the labeled volunteers wedging an incredibly large number of cars and trucks into a bustling area.

Joined a short line to register, and headed out to warm up. I kept coming back to the car for the items I had forgotten in my nervousness, eg helmet, computer, snacks, water bottle, etc. Oh, and bicycle! I greeted Steve McNally, Dan Lehane, Jim Dowd (look for mention of him at the end of this missive) and Sergio Resendes (more about Sergio in a moment). I looked for my coach (recently placed under contract at the Ladies/Shank event on Thursday evening at Agoros – of course he remembers none of the sage advice he gave me – in fact he denies being there at all – you may realize by now that i am referring to the inimitable Matt_Bikeworks).

The 250+ riders were let off at 9.00 am (the three lappers) followed by the 2 lappers. The single lap 17.8 milers labeled the novices raced off at the 9.15 am siren. Having looked at the Race Predictor, particularly at the 40+ age category I was very suspicious of the descriptive accuracy of the “novice” category. In this category was an individual who had won so many races that the Race predictor stated that if he did not win (a 99.8% probability) then he should consider himself an abject failure. Incidentally, Matt Burke, who was signed up for the two lap race – like Jim Dowd, but in the 19-39 age group – was similarly red-lined and labeled. Presumably because this pressure got to him (and not because of the two major cracks in his new Scalpel frame, or the accompanying crack in his cranium, all received at Freetown a couple of weeks ago), Matty B bowed out of the race and instead proceeded to ride his gravel bike around the most difficult parts of the course).

OK, so back to the race, remember the intrepid “novices” were by now flying down Payne Road to engage with the first technical section, the De-Motivator. My strategy was to hang with Sergio, my reasoning being that he had to be more experienced than me, and clearly is considerably smarter. We found ourselves behind a group of teenagers, who also formed an age group within the one lap novices. I had noticed them warming up, displaying skills such as riding backwards, doing wheel stands, manualling wheelies over impossible objects, etc. Clearly young, not so clearly novices. Well anyway, back to De-Motivator, where one of the teenage gang in front of us proceeded to crash spectacularly, in approximately the place where Kelly broke her wrist a couple of years ago. Of course, with the resilience of youth, Young Teenager proclaimed “I’m fine,” well before he possibly could have known that. Seems it was accurate, however, as he climbed back on his bike, and proceeded to have a ding-dong battle with Sergio and I for the rest of the race. (As an aside, Young Teenager was on the podium for the U-19 age group, upset that he could not claim one of the beer prizes).

By the time we finished the De-Motivator and headed back onto the fire roads, my heart rate was sky high, and i had difficulty even getting my bottle out to drink while I tucked in behind Sergio. He proceeded to lead us past a number of riders that seemed to be faster than us in the De-Motivator section. My heart rate did not go down much during the entire race, and was 80% Zone 4. And I only managed to drink about the first third of the bottle during the entire 1 hour 49 minutes that i was on the course.The next section was muddy (remember it rained quite a bit the previous days). Sergio and I would have done well on this section, except a few of the teenagers in front of us decided that it was appropriate to leap off their bikes and play in the mud. As a result, we were not able to display our prowess in mud, and were held up considerably!So the rest of the course was much of the same. Besides the steep gravel road up to the power lines that you all know and love, they added a climb up to the antennae towers that is, well, “interesting”.

Unfortunately, by now we had caught a number of riders from earlier groups who were really struggling, or were indeed walking, or rather climbing on foot, up the trail. I manage to spot a gap and ride past, but Sergio was trapped. I therefore opened a gap on Sergio, and being totally mercenary and unfeeling, did not wait for him, and finished ahead of him, feeling rather superior! I had a bit of a battle with Young Teenager, which I won when he struggled on the rocky “A Last Ass Kickin’ “. I on the other hand, drawing on the vast knowledge gained from crashing on the section a number of times, managed miraculously to sail right through it with only one dab. And with my last reserves i kept ahead of him to the finish. But i must admit that at the end the Young Teenager representing the Fountain of Youth seemed quite happy to embrace being beaten by the Ancient Mariner, proclaiming that I deserved it this time: he had plenty of years of competition to look forward to, while I was clearly facing imminent demise and death.

Oh, the results: I have to admit a touch of disappointment that i did not emulate the podium finish of my first criterium. But I guess that the 6th place (Sergio right behind in 7th) was not tooooo bad given the large field of 32 riders in 40+. And would have finished 4th in 19-39, if I had been smart enough to enter that category!. And when I posted my Garmin result to Strava after most of the 2 lap riders had finished, Strava said I had the KOM-10 for the entire one lap course. I am guessing that did not hold up, when all had finished and posted, but i will hang on to that achievement – after all if Strava says i was 10th fastest, who am I to argue?

What did i learn?: 1) It was tough – while on the course I swore I would not do it again, probably not even ride Freetown again. But 10 seconds after finishing I was already looking forward to next year, maybe even riding Tornado Tuesday with Matt again!. 2) I could not imagine embarking on a second (or a 3rd – horror of horrors) lap. 3) Jim Dowd is an awesome machine of a cross country mountain biker. His lap times are simply unbelievable!And when I got home, Zi looked me up and down, and did not see any blood or stitches, and said grudgingly that I could go out and play bikes with you people again. OK, got to get back to my beer and newborn grandson.