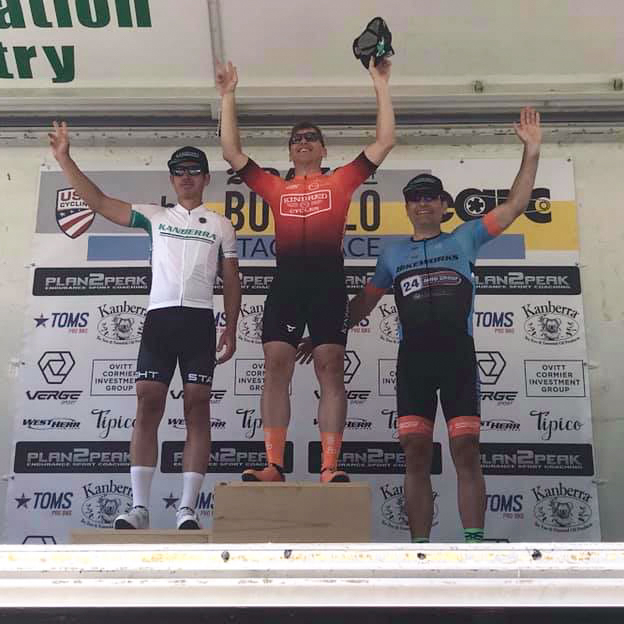 Buffalo Stage Race Report – May not have gained a top spot on the podium. But I guarantee no team had more fun or was more active in the Masters and Cat 4 fields.

Day 1 AM Time Trial – with more than double the entries from the previous year, we knew it was going to be tough and Andrew Tine Tiney fought hard to gain our only spot on the opening podium in the Masters Category.

Day 1 PM Criterium – typical flat fast criterium with regular skirmishes off the front. But our plan was not to let any get away without our guy in them, so we kept them within shouting distance. Ultimately it turned into a Sprint, and with no teams taking up lead out duties was messy and slow after 1k to go, constant bunching up, regular rubbing on all sides and guys darting left and right. But we were able to come around and through for another minor podium placing and keep a guy on the overall podium.

The Cat 4 boys didn’t fair so well with a late attack by Benjamin Dowling being reeled back in and Ronan Fay getting caught up in a last lap crash that turned his bicycle into a bike rack decoration for the remainder of the weekend.

Day 2 Road Race – It was predicted to be a soggy day, and Ben got the brunt of it in the morning Cat 4 race, the rain washing away his sorrows and a mid pack finish. In the afternoon Masters race however, the weather gods were smiling down on us. Our guys were sitting in 3rd and 4th overall, we felt pretty good about our chances and went with the same strategy as on Day 1, no breaks without our guy in them. And after the messy finish on D1, plenty of teams were determined to get away. So off to work we went, mostly keeping early attacks in check while we felt out how teams were feeling and who would be agressive, and then Tiney went on the offensive, relentlessly. Time and again off the front he went a d you could sense the collective tension rise as riders communicated. Some jumped to join him, others moving to the front to chase, the first few efforts were in vain. Then with 3 laps to go he was joined by a rider from each of the primary teams and it looked promising, over 500 meter gap sustained for over a full 7 mile lap. But ultimately a lack of cohesion in the breakaway and a solid effort by the until then un-seen race leader, lead to the groups demise. It was once again, 30+ Sprinters sensing a win and the pace ramped up well outside 1k to go creating a less messy sprint than Day 1. Unfortunately this time the move to follow was early on the outside and we were just a wheel or two off of it, only able to salvage a 4th place finish on the stage which would net a 4th overall in the Masters Division missing out on our goal of an overall Top 3 finish.

But when you’ve raced hard and smart, a funny thing happens, you get guys coming up to you left and right, literallly, on your cool down ride and in the parking lot, patting you on the back and thanking you for a fast, animated and fun race. Its not a win, but its pretty damn close, and we of course celebrated that with another Bikeworks Buffalo pub crawl. 🍻 Cheers!